By Nereida Ripero-Muñiz, Lecturer, School of Language, Literature and Media, University of the Witwatersrand

Everyday Mayfair is a participatory research methods project in which Somali migrants explore, through the production of maps, photography and storytelling, their migration journeys from Somalia to Mayfair, Johannesburg, their present relationship with the city and their future hopes and dreams of resettlement in other parts of the world.

A four-day workshop was conducted in Mayfair, Johannesburg in February 2017 with 5 participants from the local Somali community.   The workshop – facilitated by Nereida Ripero-Muñiz and Elsa Oliveira – was initially conceptualized as a continuation of Metropolitan Nomads. A journey through Joburg´s Mogadishu.  This was a collaborative project conducted in 2014 that documents – through interviews, photographs and video recordings – daily life in Mayfair, a suburb of central Johannesburg and a major hub for Somali migrants.

The aim of the Everyday Mayfair workshop was to give participants the opportunity to narrate their experiences of migration and to showcase their everyday lives through participatory creative methodologies, with a focus on photography and mapping.

Participants created four different kinds of maps: a life-line highlighting the main events in their lives; a conceptual map outlining their route from Somalia to South Africa; a world map in which they colored the countries they passed through during their journey to South Africa and the countries that they would like to go to; and a map of Mayfair, reflecting their current relationship with the neighborhood.

The life-line and conceptual maps helped participants to think about important events in their lives and how they relate to their migration experiences.  Forced migration from Somalia was common to all the participants. Movements across the eastern and southern regions of the continent – by land, air or sea – were shared on the conceptual maps of their journeys from Somalia to South Africa, as illustrated by the maps below. 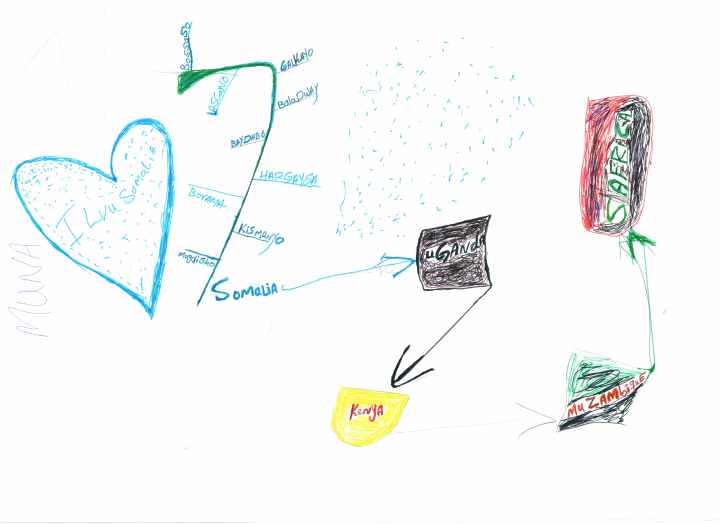 The world maps provide rich insights into the multiple migration experiences of the five project participants.  Blank world maps were shared, on which participants illustrated their journeys.  The maps provided a visual account of their feelings about each country that they lived in or passed through. Participants created individual legends indicating the colours that they chose to represent different experiences and feelings, for example white for power or peace, and red for love or danger.

The different – and often contradictory – feelings experienced in each country were reflected visually through the use of more than one colour in most of the countries through which they passed.

Even after many years of conflict, the participants shared a feeling of pride towards Somalia, whilst having ambivalent feelings about the countries through which they travelled on their way to South Africa.

Participants then drew lines indicating where other family members were residing around the word. Europe, the USA and New Zealand were the most common, showcasing the global reach of the Somali diaspora.

Canada, the UK and Australia were highlighted by participants as their ‘dream countries’ – the places that they would like to move to in the future. The USA, previously one of the most sought after countries to migrate to, has decreased in popularity since Donald Trump became president.

Finally, participants were asked to add a title to their maps and any other information they wished. The titles of the maps and messages embedded in them were very positive – focusing on the positive aspects of the lives of the participants. Some of the titles were: The king of Jozi, Father of the Love, Father of the singing, My Hopes: the girl with so many dreams.

The world maps were the richest maps created during the workshop, layering multiple forms of knowledge.  These maps reflected personal experiences of migration, highlighted the global nature of the Somali diaspora, and reflected the wishes and desires of where participants would – ultimately – like to reside. The final set of maps explored the spaces and places that participants inhabit and visit during their everyday life. Amal, the Somali shopping mall in Mayfair, appeared at the centre of all activity in Mayfair, especially for women; all five participants either own a shop there or visit daily for shopping and socialising. Fordsburg, the neighboring area, was shown as a place of recreation. Mosques and the hospital featured as important landmarks in the maps they created.

Participants generally expressed a sense of safety in the area, considering Mayfair as their temporary home. This sense of temporarily is a general trend among Somalis residing in Mayfair, who are always looking to move elsewhere.  In spite of living in the neighbourhood for several years, participants expressed a strong desire for relocating to more prosperous places in other parts of the world, as reflected in the world maps they produced during the workshop. Producing these maps was a very interesting reflection exercise, both for participants and researchers. On the one hand, researchers could learn about the migration routes taken to South Africa from the migrant perspective, seeing which places became more important for them and why during their journeys. The maps of the neighborhood also helped to develop a better understanding on how participants navigate space in their everyday lives according to gender, safety and other intersecting concerns. On the other hand, producing the maps became an important exercise for participants, enabling them time to reflect on their lives and journeys and to find comfort through sharing them with others who have gone through similar experiences.

In addition to the mapping exercises, the five project participants were invited to take photos using their cell phones, in order to generate snapshots of everyday public and private moments in Mayfair, and other places that they encounter in the city.  These photos revealed what participants choose to photograph from their daily lives; shops and pick-up trucks – the main transport used by Somalis to distribute goods around South Africa – were some of the most common spaces and objects photographed, showcasing in this way the importance Somalis  give to business activities. Public, recreational spaces, such as restaurants or pool bars, were common images among the male participants, whilst the female participants were more likely to share private spaces. The photographs highlighted the day-to-day activities observed on the streets of Mayfair. Religious spaces, such as mosques and madrassas, appeared in all participants snapshots.  Beyond the neighborhood, places like the Department of Home Affairs or shopping malls in other parts of the city were commonly photographed. 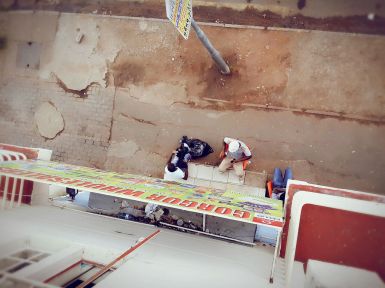 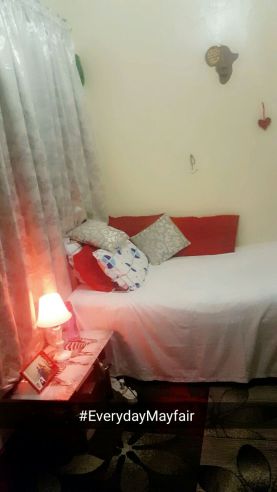 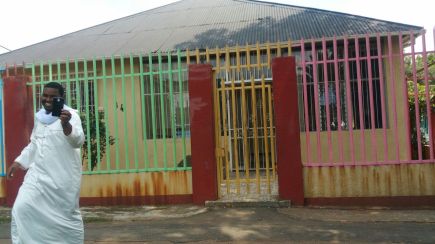 The use of participatory methods with Somali migrants in Mayfair provided valuable data about their everyday lives and migration journeys. This kind of methodology allows researchers access to participants’ subjectivities and experiences without the interference inherent in more formal research methods – such as structured interviews. Through guidance from the research team facilitating the workshop, participants were able to express themselves freely, and explore different, creative ways of representing and sharing their lives and journeys. The concluding words of Rio, one of the workshop participants, summarize the general feeling along the workshop: “These days I have felt very happy because my story has been heard”. These participatory methods provided participants with a unique opportunity to express and represent themselves, giving them the power to decide what to share about their life stories and experiences of migration.

Dr. Nereida Ripero-Muñiz is a lecturer in the School of Language, Literature and Media at the University of the Witwatersrand. Nereida’s PhD explored identity construction among Somali women living in Nairobi and Johannesburg. Her current research focuses on the transnational cultural links of the global Somali diaspora.

Funding for Everyday Mayfair was received from Security at the Margins (SeaM) and the Migration and Health Project Southern Africa (maHp).