When my colleague Elsa and I first started our arts-based research group in Johannesburg it didn’t have a name. We simply referred to it as “The Mother’s group” – based on the fact that we had started the group as a way of exploring – through participant research and arts-based methods – the everyday experiences and challenges of migrant mothers in Johannesburg. However, not all the women were mothers and motherhood for those who had dependants was so much more than what the term often conjures up. As my previous blog (The burden of care) discusses motherhood is often a space of turmoil, of the struggle to provide, of frustration and desperation and, of a burden. Therefore the name needed to be something that would not only mark the group, state it’s claim as something to which the women belonged but that also reflected what the group was about, how it was experienced by the women.

So after a discussion the women chose “Mwangaza Mama”. “Mwangaza”, a Swahili word translates literally as “light”. However, the women also described it as meaning “joy”, “love” and “caring”. “Mama is a term of respect used for all women – with or without children” they told us.

The name also seemed to encapsulate all that has taken place in the group – the light (“Mwangaza”) – of the friendships created, the support given and the times of understanding and fun and the contrasting dark times and spaces. And there have been many very difficult, darker times. I have previously written about the struggles Elsa and I have experienced in dealing with the levels of trauma in the group, in knowing how or what we can do, or even if we should be doing it (Poking the wound – research, stories and process – thinking through the complexities). There are also many experiences I haven’t yet written about in depth like when Mercy received a call to say her brother had died which then triggered an outpouring of grief from all the group members. This was early on in the year and the stories of deaths and violence that surfaced were beyond comprehension. Later in the year Precious arrived one week bent double with pain. The story that unfolded was that she had suffered a partial miscarriage and been treated horribly at a government clinic. After they forced her to wait in a toilet cubicle (as they wanted a urine sample) she miscarried. She had not known she was pregnant and so was in shock and pain. When the nurse found her she told her “good…now throw it in the bin and open a file”. She was then operated on at a government hospital and discharged without antibiotics because the nurse told her “you’ve already had an operation -medicines are only for South Africans”. There was also the time when we realised one of our group members, Mercy who had gone away for a while leaving her three children behind wasn’t coming back. These were tough times and there will be more of them. Recognising the sheer level of desperation that the women battle on a daily basis has often left us in despair –  it has also challenged us, shaped our work and questioned us at every step.

But the dark moments have been central to the group in shaping the ties that have emerged and in generating some of the lighter moments too. And there have been some wonderful moments of light. Getting to know each of the women over the twelve months has been really important and especially seeing how they have formed friendships together. Recently for example, Precious told us a story about helping Mercy, another group member who had moved to the same area as Precious but kept getting lost. The first time this happened Precious had randomly bumped into Mercy who had left her new place to buy bread but couldn’t find her way home. Precious had then walked round and round the streets with Mercy trying to help her find her building. Precious was worried about Mercy being alone in an area she was not familiar with, and even though Precious had two small children at home and many of her own worries she still spent time helping Mercy get home. These two women ten months earlier had not known one another and yet now walking the streets of Joburg in force, keeping each other safe – in a mutual recognition of the risks of the city and their own vulnerability as women, as non-nationals and moving in spaces shaped by crime.

In our last meeting for the year we had a small Christmas party and the women brought their children and danced and exchanged gifts. The dancing was imperative we were told – and it felt like a very special space to watch women who we knew had lost so much and faced a difficult Christmas with no money – dance with one another and with us. We had also taken the opportunity at that end of year session to ask the group to reflect on what the group had meant to them over the past year. The women generally expressed that the group had given them a chance to form friendships, learn from others and share in ways that they wouldn’t do so in their everyday lives. Elsabe from Angola for example, who joined our group later in the year, noted that she had been coming to the NGO (through whom we work) since 2010 but had never seen the other women there: “hearing these stories I feel like I’m not alone”. Redina, one of the quieter group members had commented, “I’m always happy and excited when it’s Friday. Happy to see these faces. I have missed you when I couldn’t come to the group…everytime when I share in the group I feel I leave my load here. Like I leave everything in the room”. Rose had also noted that the group had created a space where she could talk about the stresses of being in a “new country”, where she could feel listened to and, supported.

Some of the women were also very honest and frank about the group. Mary, for example. a single mother to four young children stated that for her the money and food was the most important aspect of the group. Each week we give a small stipend for transport and provide breakfast and lunch for the group. For Mary, and the others, this was often the only money coming in and the only chance to have a proper meal and take home any extra for the children. While Mary went on to say that she also valued the friendships and support she received it was important she was able to say that the money mattered. Important for her in highlighting just how difficult everyday life in Johannesburg is, especially when you don’t work and have children. Important for us to be reminded that research and the groups created cannot always be about people wanting to share and giving part of themselves or stories. While we hope that participation can offer something – a chance to share a story, to meet others, to do something different – we need to acknowledge that sometimes it is only about the money. And this has to be OK as a reality of research and as a reality for many of us in our work and everyday lives. Yet like the difficulties of dealing with emotions – for both the participants and ourselves as researchers – issues of money are rarely discussed easily and tend to lead to divided opinions and judgement rather than context-based understanding.

The descriptions the women gave of the group and of it’s purpose in that last session reminds me of the way in which Judith Butler talks about grief in relation to tragedy (in her case reflecting on 9/11) and the forming of ties. She states that sharing loss with others enables ‘a tenuous ‘“we” of all of us’ – creates ties and new forms of connectibility – through which we reveal our vulnerability (Precarious Lives, 2004: 23). While it is maybe too early, or the context is too complex to claim that strong ties have been formed in Mwangazi Mama it is clear that the mutual recognition of loss and of at times, desperation has allowed a level of connection that did not exist before. This is not an easy connection. It is tense and at times, tested. Mistrust and, even hostility has arisen through misunderstandings. There have been arguments over food, over intentions and over the nature of the group. But there has also been small threads which have started to tangle together – threads of recognition, of sharing in a process, of understanding the pain.  In recognising that the women are generally isolated, that their daily burdens of providing for their children and battling the many obstacles they face in accessing healthcare, education, documentation and employment – this “we” – the group of Mwangazi Mamas – really matters.

And this is what frames our next series of sessions as we move into 2018. This year the project will likely come to an end as the funding finishes and my postdoc will be completed. But before that we want to spend more time reflecting with and on Mwangazi Mamas. We want to complete the quilt pieces that the group have been working on, continue sharing and recording stories and findings ways to provide support. The quilts will be interesting – they are composed of the stories of the women but they also tell the story of the group – the struggles, interruptions, incomplete sessions, things that were invested in and, those that were abandoned – the process that we haven’t been sure about. We are still not entirely clear what this looks like. We are aware that careful planning of sessions is often usurped with a sudden crisis or problem that needs to be discussed. But we at least expect that now, and we value this very ambiguity defining what Mwangazi Mamas is about. 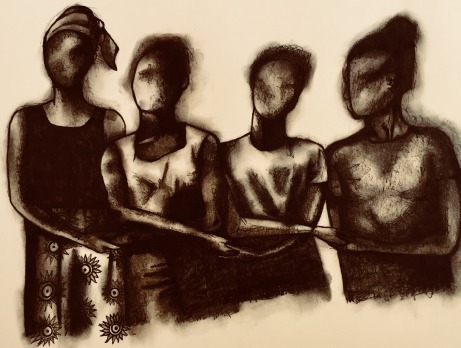 The research for the group is funded through MaHp, SeaM and a “Life in the City’ postdoc with the Wits School of Governance and hosted by The ACMS.